There is 21% oxygen in the air that we breathe, and our lungs transfer this oxygen to our red blood cells (via hemoglobin). These oxygen-filled red blood cells are carried around the body by the plasma (fluid), which travels through the blood vessels. The oxygen diffuses into the surrounding tissue ensuring that it is delivered to where it is needed most. 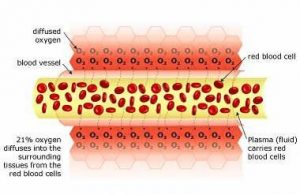 When there is a restriction (occlusion) in blood flow due to surgery, illness, or injury, the red blood cells block the blood vessel and are unable to transfer oxygen to the cells on the other side of the occlusion. This causes swelling and starves the area of oxygen, causing hypoxia (a lack of oxygen); when this occurs the tissue begins to break down. Hypoxia triggers ‘apoptosis’ (programmed cellular degeneration – clumping and clustering of damaged nerve cells surrounded by healthy neuronal tracts). Apoptosis modifies the expression of plasticity (the ability of the body to repair). Apoptotic bodies and altered DNA fragmentations are observed in the avascular ischemic region with increased inhibitory biochemical factors (proteins) released into the damaged parts of the brain and spinal cord causing further deterioration. Apoptosis has been identified in all neurodegenerative disorders including brain and spinal cord injury. Apoptosis fosters the cycle of continued dysfunction, degeneration and ultimate neuronal death. 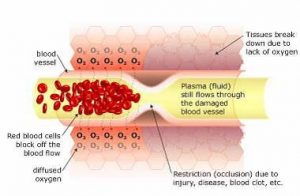 Breathing 100% oxygen under pressure causes the oxygen to diffuse into the blood plasma. This oxygen-rich plasma is able to travel past the restriction, diffusing up to 3 times further into the tissue. The pressurized environment helps to reduce swelling and discomfort, while providing the body with at least 10-15 times its normal supply of oxygen to help repair tissue damaged by the original occlusion or subsequent hypoxic condition. Hyperbaric Oxygenation (HBOT) directly increases the saturation of tissue oxygenation, slowing and reversing hypoxic induced apoptosis – restoring blood supply to the compromised region by the development of new capillary networks (neovascularization) enabling the body to alter the course and impact of the disease process. 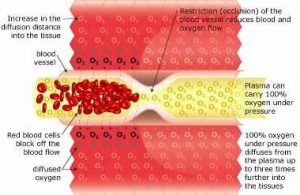 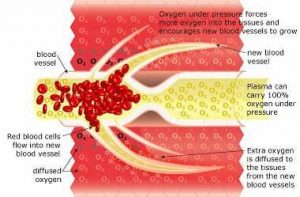