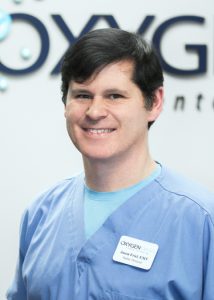 is an experienced Hyperbaric and Advanced Wound Care Technician with 9 years in the Hyperbaric/Wound Care field and 20 years in Emergency Medical Services. HHe holds a BA from the University of West Florida and is an Emergency Medical Technician with an Advanced Cardiac Life Support certification.  As the Director of Safety and Operations, Jason is responsible for maintaining a safe, healing environment and guiding patients through the process of Hyperbaric Oxygen Therapy treatment and Wound Care from the first appointment through the last.

Jason states his favorite part of job are the relationships he builds with his patients and their families over the course of their treatment and celebrating the progress they make week after week.

When Jason is not treating patients at Oxygen Oasis, he is practicing Emergency Medicine representing National Event Services (NES).  NES provides medical coverage for Philadelphia sporting and concert events which include the Philadelphia Eagles, Flyers, Phillies, Sixers and local colleges.

Liam has been in healthcare since 2003, working in North Philadelphia as member of a critical transport team. Since 2015 he has been in the hyperbaric medicine field as a hyperbaric chamber operator and safety director – most recently with Aria-Jefferson Health.

Liam is a Pennsylvania licensed EMT-B and is a Certified Hyperbaric Technologist (CHT). His favorite part of the job is discovering all of the conditions that are beneficially treated with hyperbaric oxygen therapy (HBOT).

Doreen joined the Oxygen Oasis team in December 2019, excited to be a part of a compassionate office in support of holistic healing.  Previously she worked nineteen years for a children’s dental office in Bucks county, including responsibility as Office Manager for three years of her tenure.  Doreen pride’s herself as being a team player. Her heart and passion has been to work in a healthcare environment that facilitates healing.

In 2018 Doreen’s life took a different path when her daughter was involved in a snowboarding accident. Her daughter started hyperbaric oxygen therapy treatment just eight weeks following the accident…..and this lead to her position at Oxygen Oasis!

When Doreen is not at work, she enjoys time with her husband and family.  In their free time they enjoy riding bikes along the canal, going to the YMCA and spending time together at their local Starbucks.